As our great poet Odysseus Elytis once famously said, if you deconstruct Greece, you will see at the end that what is left is an olive tree, a vineyard and a fishing boat. In the same land, the famous chef Lefteris Lazarou uses these ingredients to create a unique seafood experience in his restaurant, Varoulko.

Since 1987, when he first opened the doors of “Varoulko” in Piraeus Lefteris Lazarou has been creating gastronomical masterpieces and experiences for the mind and the palate. His recognition came not only in the form of a Michelin star in 2002 –the first one ever awarded to a restaurant serving Greek food in Greece– but also in the form of various awards every year.

Lefteris Lazarou draws his inspiration from the sea. His constantly evolving cuisine is creative but redolent of tradition as well as innovative yet unmistakably Greek. When choosing the “Varoulko Seaside” restaurant in Piraeus, the visitor can enjoy a simple lunch, or he can opt for the fine dining experience.

The restaurant is located in the Mikrolimano marina, in front of the sea, has easy access from downtown Athens & Piraeus and provides its visitors with an elegant atmosphere as well as an outstanding view of the Athens Riviera. While relishing the flavours enjoy the surroundings of the beautiful “Varoulko seaside” restaurant, the picturesque portrait of the Mikrolimano marina and its enchanting atmosphere by night.

Born in 1952 to a father who worked as a ship-chef, Lefteris Lazarou, never thought of following a different path. When he was 15, he started working with his father in ship kitchens during the summers. He travelled around many countries and worked with their national cuisine. However, working at cruise ships was where he learnt the most about cooking. Having to cook for different people daily, he had to adjust Greek cuisine to their own nutritional habits. As time went by, he decided to create a “boat” on land, a kitchen that will never get rocked by the waves. Therefore, in October 1987, he opens Varoulko where he has been creating seafood plates made entirely of ingredients he comes upon daily, as he wanders through the various markets.

These past few years, Lefteris Lazarou, has been a loyal ambassador of the Greek tastes as he has travelled to Argentina, Japan and America, as well as most of the European capitals to promote Greek olive oil through presenting the Greek cuisine. In the U.S.A, he has taught Greek cuisine in one of the most famous cooking schools, the Culinary Institute of America (CIA). 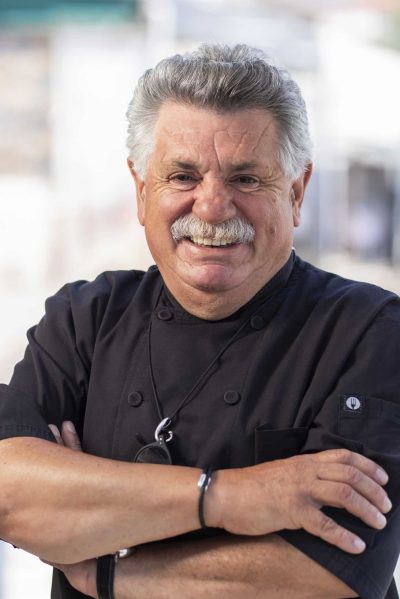 Since 1993, Lefteris Lazarou and Varoulko have been oh so proudly awarded with many prestigious distinctions.

– In 1993, Chef Lefteris Lazarou was awarded his first Toques d’Or award, handed out by the top entertainment guide in Athens, “Athinorama”.

– In 2002, Mr. Lazarou was given the first ever Michelin star to be awarded to a Greek Chef, which he maintains to this day, making Varoulko the ultimate international hotspot for seafood.

– Since 2009,, Varoulko is awarded as “Best Greek Cuisine Restaurant” and “The Best Restaurant in the City” by the Athinorama guide.

Varoulko Seaside is more than a gastronomical destination. It’s a culinary experience for the senses that starts from the moment you enter the restaurant. Inspired by the treasures of the sea, from the hues of blue and earthy tones to the beautiful paintings and detailed embellishments along with the majestic view, it all comes together to set the mood for you to enjoy cooking at its highest form.

EXPERTISE IN A BITE

Through their love for fish, seafood, local tastes and the finest Greek raw materials, Chef Lefteris Lazarou and his team have created a menu with dishes that exude ingenuity and are a true testament to Varoulko’s legacy. Starting with the implementation of elite techniques and the use of the freshest raw materials, the result cannot be anything less than effortless tastiness.